The traditional method of 3D Modeling is with a computer program on your desktop like Revit, Sketchup, or Rhino. These computer programs leverage that devices graphic processing unit to render models in 3D. Until recently, a browser has not been able to use processing power of the GPU and instead has had to rely on the CPU or computer processing unit. The introduction of WebGL into browsers has allowed developers to add 3d within a browser using the GPU. This saves the browser from using your CPU.

Many modeling companies including Autodesk are moving towards the WebGL direction, since model manipulation is much smoother. In May 2014, Thornton Thomasetti had a hackathon and a product team came out with vA3C which are a basically a bunch of exporters for Revit, Grasshopper, 3D Studio Max, and Sketchup to export to a JSON format. As quoted from JSON.org: “JSON (JavaScript Object Notation) is a lightweight data-interchange format. It is easy for humans to read and write. It is easy for machines to parse and generate. It is based on a subset of the JavaScript Programming Language, Standard ECMA-262 3rd Edition – December 1999. JSON is a text format that is completely language independent but uses conventions that are familiar to programmers of the C-family of languages, including C, C++, C#, Java, JavaScript, Perl, Python, and many others. These properties make JSON an ideal data-interchange language.” 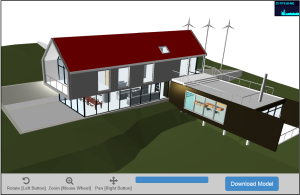 Over this past summer we developed a 3D model viewer to view 3D models exported from Revit (or other formats) using the vA3C export into a WordPress Site. WordPress is the world’s leading web publishing platform and about 20% of the entire internet runs on WordPress including the NBA and Conde Nast. Since it has been developed as a wordpress plugin, all you need to do to use is install it on your own WordPress site! Choosing a WebGL library was hard. There are so many out there and so many that change every day. Three.js was the obvious choice, but that too is always being upgraded.

The model viewer is an open source plugin for wordpress that can be used on any project site that currently uses WordPress to collaborate. It is also 100% compatible with the eManager framework and has already been rolled out to every project site using it.

Matthew M. Emma was born in New York, NY where he currently resides after receiving his degree in Building Construction and Real Estate Development from Virginia Polytechnic and State University. Matt loves everything web related including PHP and WordPress! Featured in ENR for developing a construction program based on WordPress during the renovation of the new Madison Square Garden (Even featured in several of the Transforamtion show episodes). Let’s go Rangers! View all posts by iphoenix72

This site uses Akismet to reduce spam. Learn how your comment data is processed.